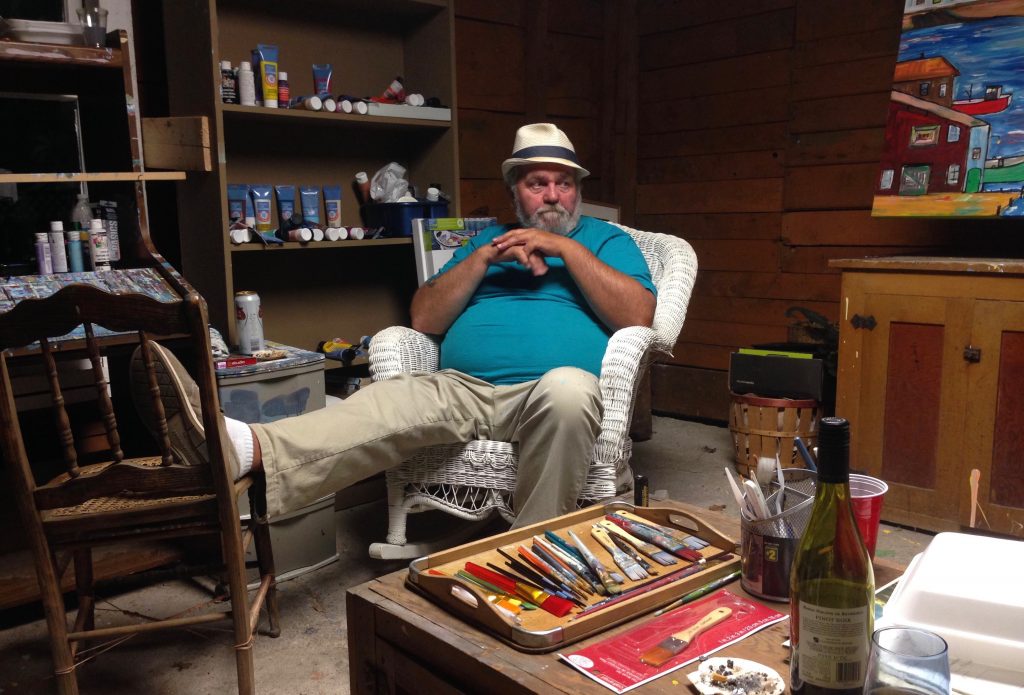 Tripp, the artist, is a free-spirited outdoorsman and entrepreneur who has plied in many trades. Originally from Nova Scotia Tripp has travelled the country extensively, pursuing multiple careers before coming ‘home’ and settling in Annapolis Royal, NS. Previously a fisherman and charter boat captain, Tripp’s art draws heavily on the stories and scenes gathered during his time at sea. Tripp’s artistic career started later in his life when at the age of 63 he received the gift of an art set from his wife Lynda.

Completely self-taught, Tripp’s artistic talents were fast apparent; he works primarily with acrylics on canvas but has also worked with oils and on a variety of interesting mediums such as vinyl records. His unique, vivid, and engaging impressionistic folk-art style, draws people in, inviting them to imagine the story presented and to travel with Tripp through his wonderland of vast seascapes and quaint coastal towns.

Tripp’s artwork not only invites your imagination to travel but has itself travelled across the globe, with sales to individuals all over the world. Like chips, those who find his art engaging rarely can purchase just one piece. Tripp has begun amassing loyal collectors, with multiple having over 10 pieces, and one collector currently owning approximately 65 pieces of original Tripp artwork.

In homage to his Mi’kmaq heritage, Tripp has completed several series of work for the Mi’kmaq people. Tripp worked and lived among the indigenous people along the north coast of BC and in Alaska for a large part of his life. While living out west the Raven became his spirit totem, following and conversing with him. The Raven matches Tripp’s character as a totem perfectly, one who is playful, creative, wise, seeks stillness and brings messages to others. Tripp’s earthy tones and vibrant hues are characteristic of the Mi’kmaq culture, and his natural knack for verbal and visual story-telling is surely a result of his ancestry.

His love for art and those who make it, lead him to open his first gallery under the name ‘Tripp’s Gallery’ in Annapolis Royal, in 2015. While the gallery represents multiple successful professional artists, Tripp’s own artwork headlines; selling an amazing 500+ pieces on average a year. In 2018, needing more space and wanting to support even more artists, Tripp opened a second Tripp’s Gallery also in Annapolis Royal. The original gallery is now being converted with a focus on handmade items to represent a wider variety of artists and artisans.

Tripp is constantly giving back to the art industry, by finding charitable sectors in his local area to donate his time and money, creating art supply filled gift bags given out at Christmas, mentoring and supporting new and upcoming artists both through the gallery and personally, he is endlessly passionate about art and artists.

With two successful galleries, helping represent not only himself but also other artists, Tripp is now focusing on his own identity as an artist. While the galleries holding his name will always be the primary home for his artwork, Tripp is ready to spread his wings, branching out to find new places and people to share his work with. 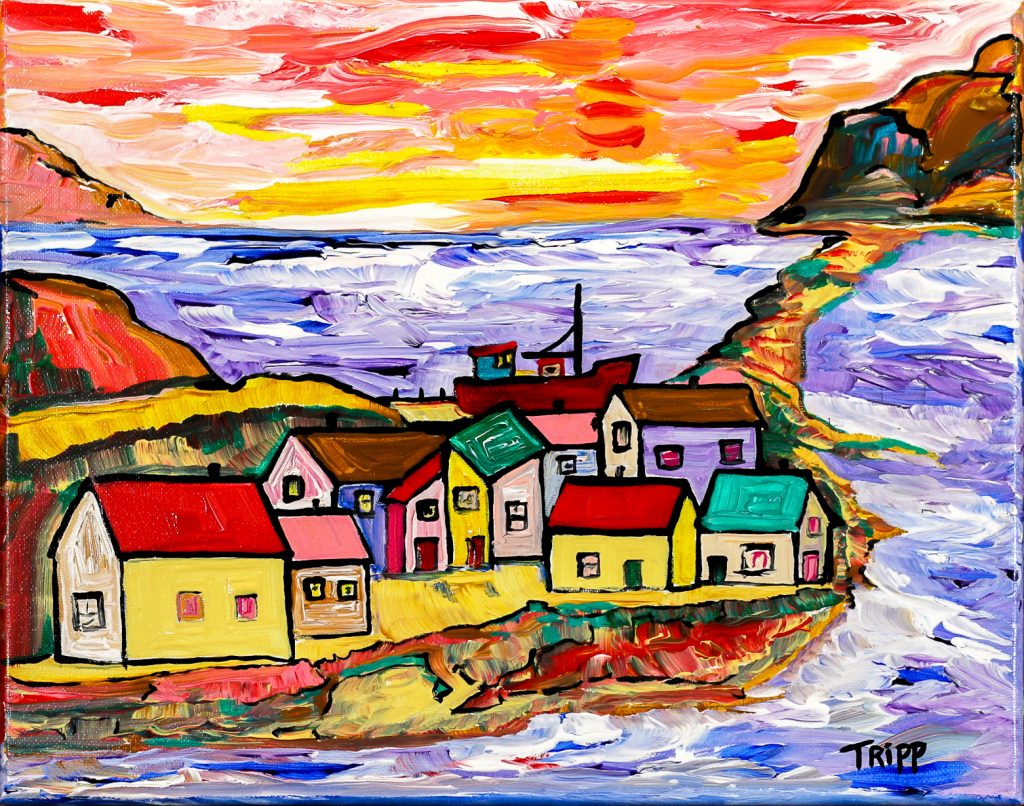 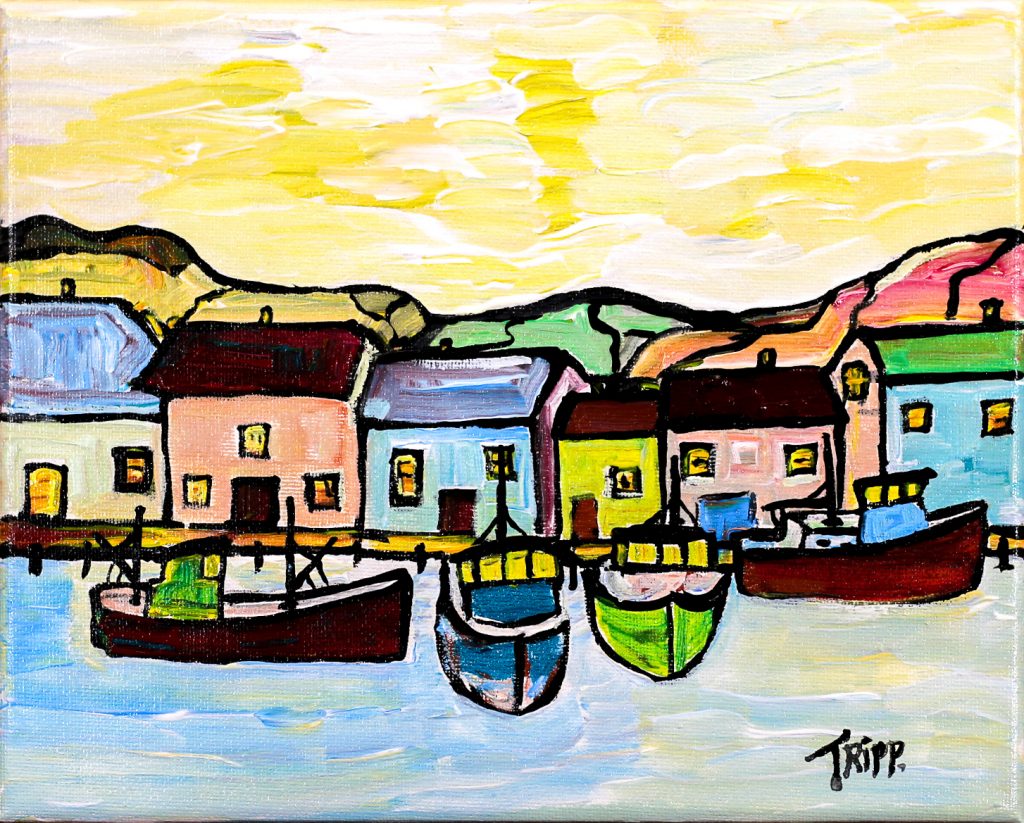 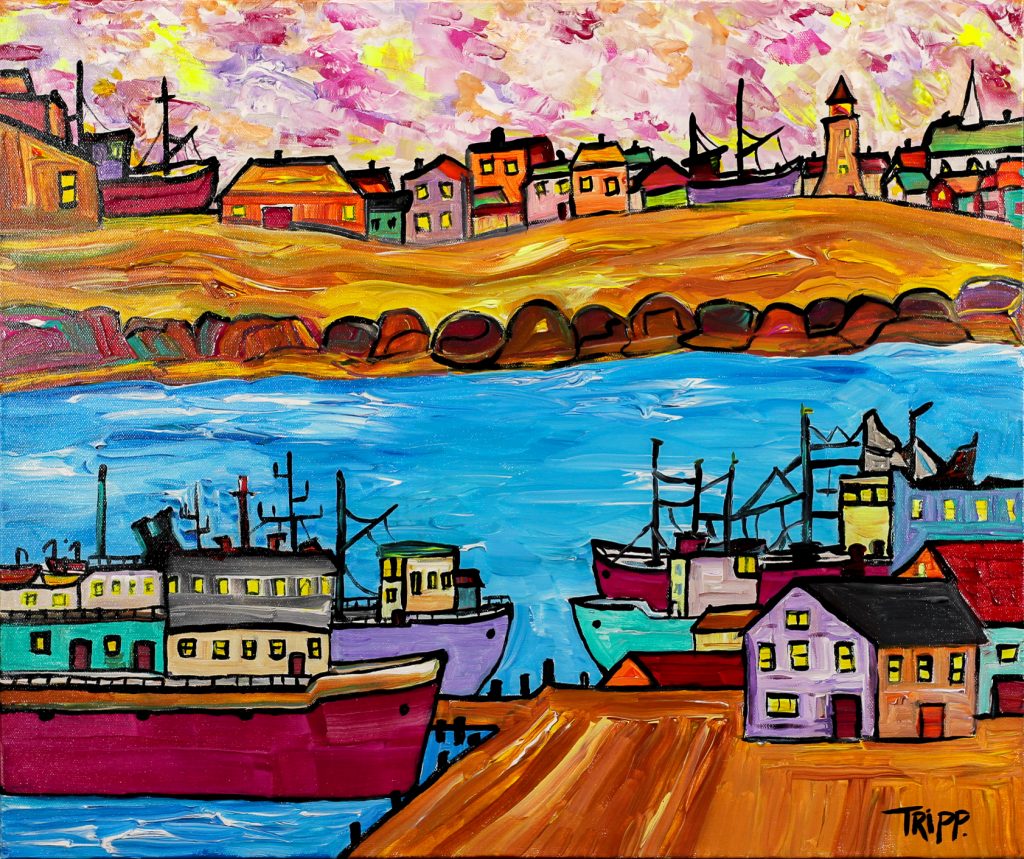